*If you need help finding a mental health professional, call 1-800-662-HELP (4357) or visit BetterHelp to chat with a licensed therapist for an affordable price. This post may contain affiliate links, which means I receive a commission if you choose to purchase through links I provide (at no extra cost to you). Please see my disclosure policy.

I know you love them! Celebrities with social anxiety can help to raise awareness and normalize what may otherwise be a stigmatized condition. Social anxiety is not a well-known condition, but the celebrities who live with it can change all that.

I got to thinking that maybe social anxiety is not a “sexy” disorder in the sense that it draws a lot of attention, but there are certainly some famous celebrities with social anxiety. Famous people with social anxiety include actors, musicians,  and athletes, they are both male and female, and many have been outspoken or at least candid about their experiences.

In no particular order, here is a list of celebrities (each in their own way) who we know live with social anxiety (to varying degrees).

Actor Nicole Kidman has stated that when on the red carpet, she would panic because of all the cameras, and that her hands would shake and she would have trouble breathing. Apparently, her then-husband Tom would whisper to her that everything was going to be all right.

In an article in People, it was revealed that Nicole drinks the Organic Matcha green tea listed below throughout the day. Green tea contains L-theanine and has a calming effect on anxiety, so she’s making a very good choice.

Actor Charlie Hunnam is quoted as saying that he hates going to parties, making small talk, and socializing with people he does not know. What’s more, he reported feeling awkward and nervous in those situations, and that he tends to worry all day if he has to go to a party in the evening.

Johnny Depp has spoken about the loss of his anonymity being uncomfortable and preferring to stay home versus eating out at restaurants, because of a preference for not being recognized. I see Johnny Depp as being more on the introverted side of the spectrum, but it’s hard to know without more interviews with him discussing the role of anxiety in his life.

Kim Basinger grew up with anxiety about being in public places and developed a habit of staying in her house. When she came to Hollywood, she hid in baggy clothes out of embarrassment and was passed over during auditions. She has talked about playing the piano to vent her frustration over her anxiety and agoraphobia.

According to this article in People, Kim Basinger’s favorite healthy drink is to mix cranberry juice (without sugar added) and dandelion tea together over ice to help reduce bloating.

Barbra Streisand has shared publicly her embarrassment about forgetting the lines to one of her songs and being unable to regain her composure. She has also talked about dwelling on negative reviews and having a low sense of self-worth.

Eventually, however, she learned that performing was not about being perfect, and found that when she relaxed a bit she was able to enjoy herself. She has learned self-acceptance and to believe that she is enough.

Barbra published a book in 2010 called My Passion for Design that shares all aspects of her homes from the architecture to the decorating and gardens.

Sally Field has admitted to being very shy and a hermit who has to be dragged out into social situations by her sons or her friends. You can read or listen to Sally’s story in her book In Pieces.

Actor Jennifer Lawrence reported that when she entered school she developed a type of social anxiety, in that she did not like recess, field trips, or parties, and felt like she did not fit in.

In an article in Harper’s Bazaar, Jennifer discusses her signature perfume, Joy by Dior, which includes a hint of sandalwood. This makes sense, since sandalwood is known to help relieve stress and anxiety. My own favorite perfume, Dune by Dior, also contains sandalwood and smells wonderful.

Singer Donny Osmond has talked about feeling powerless to overcome his panic attacks related to performance anxiety. He reported that once the fear got a hold of him, he felt like he had lost everything that was familiar and safe. You can read about Donny’s life in his book.

Jonathan Knight is known for being the anxious member of the New Kids on the Block. As the popularity of the group grew, he felt trapped, nervous, and afraid in various performance situations that he was expected to face. I’d love to someday interview Jon about his experiences.

I go way back with the New Kids on the Block: I attended my first concert at age 16. I’ve attended two of their more recent concerts as well, the last one with my daughter. I looked up at one point and Jon had crawled through the rows of seats and was singing five feet in front of us!

You can read more about Jon in the authorized biography of the New Kids on the Block, Five Brothers and a Million Sisters.

Ex-NFL football player and Heisman Trophy winner Ricky Williams talks about how when he was drafted to New Orleans he became unable to leave the house and didn’t want to go anywhere such as to the grocery store or on dates.

He’s also been vocal about his diagnosis of social anxiety disorder in the hopes of helping other men like himself. I’d love to interview Ricky Williams someday too! I know he continues to be a spokesperson and speak out about anxiety and how he changed his life. Ricky has a line of CBD products that promote anxiety relief and calmness.

Do you know of any other celebrities with social anxiety? Who is your favorite?

WANT TO REMEMBER THIS? SAVE THE TOP 10 CELEBRITIES WITH SOCIAL ANXIETY ARTICLE TO YOUR FAVORITE PINTEREST BOARD! 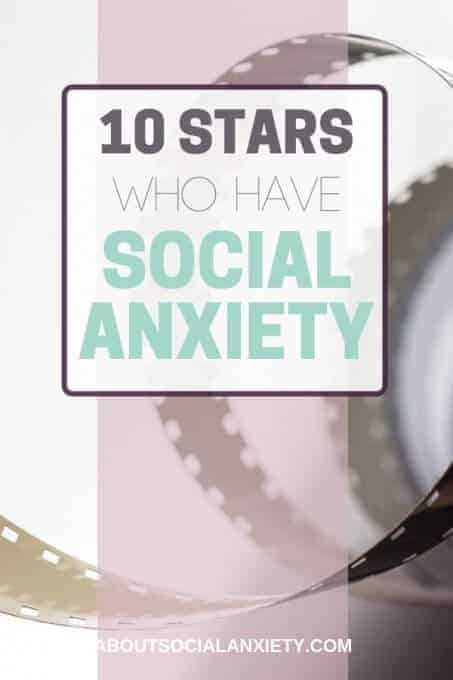 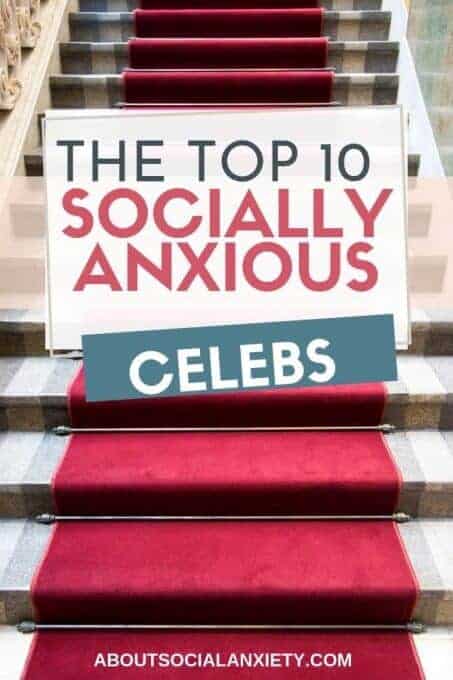 The Top 10 Celebrities with Social Anxiety

Previous Post: « How to Karaoke When You Have Singing Anxiety
Next Post: 10 Ways to Get Free Online Counseling »

Hi there, my name is Arlin. I help you stop worrying what people think so you can live the life you want. You can learn more about me here.

About Social Anxiety is a participant in the Amazon Services LLC Associates Program, an affiliate advertising program designed to provide a means for sites to earn fees by linking to Amazon.com and affiliate sites. Click here to read the full disclosure policy.